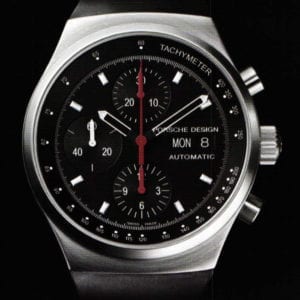 You can hear them ticking in museums, they have enraptured watch-lovers for decades and at the moment of their inception they created a completely new look: famous classics which have remained timeless, each in their own way revolutionizing the art of watchmaking. 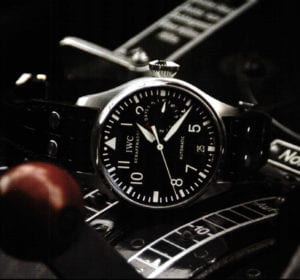 New look for the cockpit: the large pilot’s watch by IWC with automatic movement 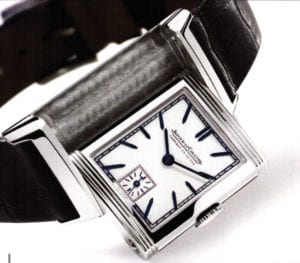 Since the thirties, the reversible case of the model Reverso has been a trademark of the Swiss watch manufactory Jaeger-LeCoultre

Time is the ultimate test: which design can survive the test of time, which design can endure? It was the creative geniuses, the visionaries, the artists who designed watches in the past which have remained highly fashionable to this day. A quick look at where they came from leads us right back through the corridors of time, touching every now and then on the big names of the jewelry and watch industry.

Louis Cartier, for example, was an ingenious Parisian jeweler who came up with the most unforgettable designs at the end of the nineteenth and beginning of the twentieth century. Impressed by the first English heavy armored vehicles known as “tank”, which trundled off to war in 1916, he created a rectangular watch which caught people’s imagination. His tank model went through a whole series of metamorphoses and remains one of the centerpieces of the current Cartier collection. Right alongside it is the Santos model which Louis Cartier created in 1904 for his friend Alberto Santos-Dumont, a Brazilian who managed to astonish noble Parisian society with his own hot-air balloon and aircraft constructions. In order to allow him to comfortably read the time when the air, this swashbuckling bon vivant asked the jeweler Louis Cartier to custom make him a wristwatch; this request was promptly fulfilled in the form of a rectangular watch with rounded edges. However, the first “real” aviator’s watch took a little bit longer to emerge: it wasn’t until 1936 that IWC came up with a special timepiece for aviators with an easily legible watch face, strikingly luminous hands, large luminous numerals and a rotating bezel with timer function. The most famous model was the IWC pilot’s watch Mark XI – the basis for a collection which has remained successful ever to this day. 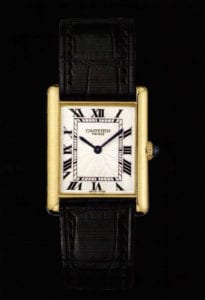 The legend lives: Tank by Cartier with classic gold case 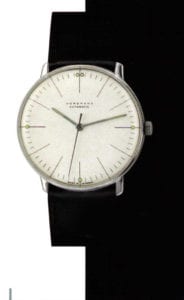 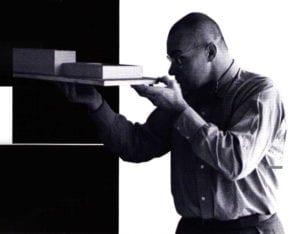 Max Bill worked as a painter, architect, sculptor, teacher, publisher and designer. He created an inimitably simple watch for Junghans 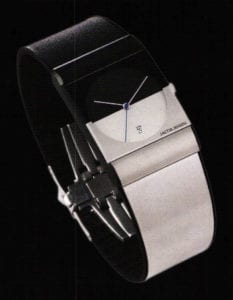 Typical Jacon Jensen design from the eighties: the silver and black face of the titanium watch creates an association of night and day. Especially tricky: The hands, which are also kept in black and silver, are only visible on one side of the dial

Similarly, the 1930s saw the emergence of another watch for real men: for polo players. They were complaining that the watch glasses were forever breaking during their game. Not only did the Swiss watchmaker Jaeger-LeCoultre successfully manage to make a virtue of this necessity, he also created a legend in the process: a watch with a reversible case. The watch face Reverso could simply be turned inwards during the game. Thanks to mechanical refinement, contemporary models often display the time on the reverse side also. The birth of the Reverso came at a point in history when many designers wanted to make a radical break with traditional ideas. It was Bauhaus that cleared the way for the painter, architect, sculptor, publicist and designer Max Bill Born 1908 in Switzerland, he created a series of wall and table clocks for Junghans toward the end of the 1950’s; this was followed in 1962 by a wristwatch with a simple modern dial design. This particular model is still being produced in its original form and has attained the status of a timeless classic which has since become part of the collection at the Museum of Modern Art.

The industrial designer Nathan George Horwitt took the concept of reduction a few steps further in 1947 when he designed a jet black watch face without numerals. The only detail was in the shape of a golden dot positioned at 12 o’clock for the purpose of orientation. Horwitt presented this concept to eleven different manufacturers, none of whom could warm to the rather Spartan design. In 1959, however, the Museum of Modern Art included a prototype of the watch in its collection. In 1961, Movado produced the museum watch which has since undergone a score of variations and is nowadays typical of the watch brand.

During the 1970s, wristwatch design was literally turned on its head once more. Revolutionary concepts materialized, distinguished by an angular and charismatic look which continues to endure to the present day. The name Gerald Genta is very closely associated with this period. The 75 year old designer practically wrote wristwatch history with models such as the Royal Oak by Audemars Piguet, the Nautilus by Patek Philippe or the Bulgari-Bulgari. He worked for Omega, IWC and many other prestigious labels before launching a brand under his own name. 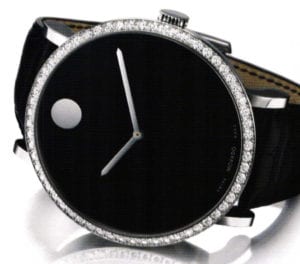 The Museum Watch by Movado: reduced to the essential, emphasized by a diamond bezel. White gold case and automatic movement

The radical reduction: designer Nathan George Horwitt created a dial without numbers. Only a golden point provides orientation, and it became a trademark 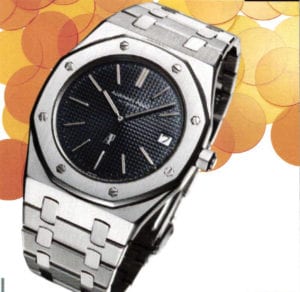 In 1972, Gerald Genta developed the model Royal Oak for the Swiss watch manufactory Audemars Piguet. He has called himself the “world’s first watch designer” since 1961, working for various watch brands

The crowning glory of Genta’s career came in 1972 when he was commissioned by Audemars Piguet to design a sporty watch in stainless steel for their collection, a completely new look for a manufacturer so richly steeped in tradition. Genta created a timepiece comprising an octagonal bezel resting upon a round case, accentuated with eight clearly visible screws. The success of the Royal Oak exceeded all expectations: by the time of its 30th anniversary in 2002, this iconoclastic object had already been sold over 150,000 times. A key ingredient of its success can be attributed to the fact that Audemar’s Piguet cleverly varied the timepiece. Regarding the movement, practically everything is available from quartz to mechanical Grande Complication; the watch exterior comes in a whole range of materials, including stainless steel, gold as well as platinum, titanium, tantalum, rubber-covered steel and carbon. In 1974, Genta designed another steel sports watch for Patek Philippe: he gave the Nautilus an octagonal bezel with convex sides, secured to the case like a porthole by means of hinges. The first Nautilus coquetted with its luxurious image and was promoted with slogans such as “one of the most expensive watches in the world is made of steel”. Ebel’s proprietor Pierre-Alain Blum also managed to create a classic in 1977 with Classica, a fusion of a sport look, elegance and an angular disposition. 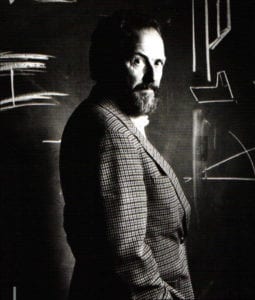 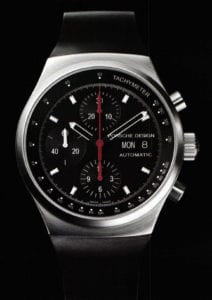 Porsce Design Heritage P’6510 P011 with direct stylistic reference to the first model from 1973. Chronograph with speedometer in a stainless steel case 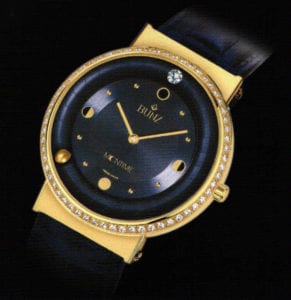 In 1993 Atelier Bunz developed the model Moontime – a watch with what was at the time the greatest precision of the moon phase display and a patented, mechanical movement 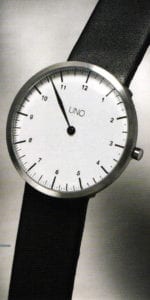 “Things get simpler when you reduce them to the essential”. This was the premise Klaus Botta took in 1987 in developing his single-hand watch Uno. It was produced for the first time in 1994 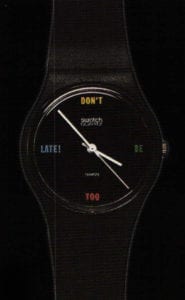 Long standing conventions were also torn down by a designer with a prominent international name: Ferdinand Alexander Porsche of the automobile manufacture dynasty set up his own design studio in 1972. As early as 1973, he produced a bracelet chronograph with an instrument design evocative of the unmistakable look of the 911 speedometers and which, by way of its color, all in black, caused quite a stir. Porsche Designs striking watch icon remains distinctly functional and highly legible up to this day. Last but not least, there is another horology classic worthy of mention that one would normally not expect to find in this context: the shrill, plastic colorful Swatch, which changed the face of the Swiss watch world like no other before it. Introduced in 1983 by the SSIH, as the company was then known, it kicked up a storm and sparked off a whole new craze for collectors. Barely quarter of a century later, by the middle of 2006, 333 million Swatches had been sold. For in the end, it is the wearer of a watch who determines the success and longevity of a design concept.

All articles by this author
Previous Elektronos Competition for Amber Jewelry
Next Sepp Schmolzer: Realm of Fantasy
Social media