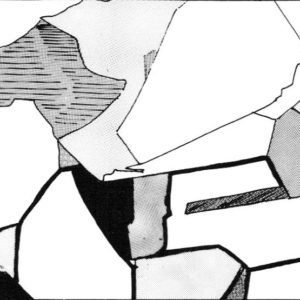 Technical Briefs: All About Metals

This entry marks the beginning of a new, regular column in Metalsmith. It will deal with technical concerns of interest to a wide audience, addressing topics as diverse as vanguard technology and ancient arts. It will answer questions from readers and respond to suggestions, always trying to explain in simple terms the magic and wonder of working with metal. For this first column I’ve chosen an obvious place to start: the very stuff of smithing—metal. I’d like to thank Dr. Peter Sexton of Handy & Harman for his important help in writing this.

Metals exist as atoms, clustered together in crystals. In the case of elements like silver and gold only one kind of atom is involved. In alloys like sterling two or more elements are combined in a solid solution, usually with the effect of creating a material with properties different from those of its components.

In crystalline materials like metals the atoms tend to arrange themselves into regular, geometric patterns. It is the behavior of these structures that is usually of most concern to metalworkers. Thorough understanding of the behavior of crystals is an intensive study and what follows has been necessarily simplified. By looking at a “day in the life” of a sample of metal perhaps we can begin to understand the effects we observe in the studio.

Let’s begin with an ounce of sterling scrap. Rather than starting with the ore, which is a subject all by itself, we’ll pick up the story after the metal has been refined and alloyed. Imagine that the metal is being heated and will be poured into an ingot mold, The torch flame used to heat the metal is a mixture of fuel and air, the adjustments being contrived to see that all the oxygen in the vicinity is being used to support the flame. This is done with a reducing flame; that is, a flame with a surplus of fuel. Oxygen has an inclination to attach itself to the copper atoms of our alloy to form a compound called copper oxide. This dark gray or brownish material is unattractive and reduces the working/joining properties of the original alloy. In addition to using the proper flame, as we melt the scrap we’ll introduce a chemical (flux) that is hungry for oxygen and will divert it away from the sterling and into its own compounds. When the metal is completely fluid, we’ll pour it into a cast iron or steel mold. 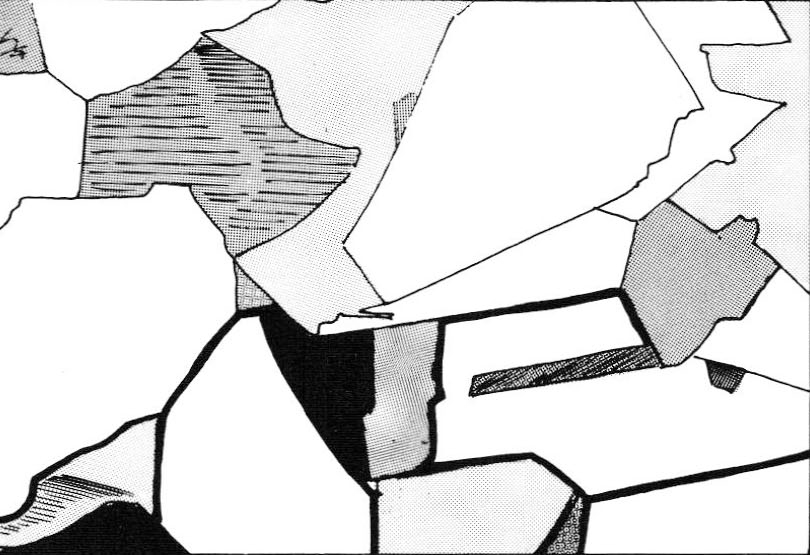 Artist’s rendition of grains in metal when viewed through a microscope. The dark line shows grain boundaries.

Because the cooling process is critical to the structure of the metal, the mold has been heated to several hundred degrees Fahrenheit. As the alloy cools the atoms slow down and assume a geometric structure with symmetry. The first atoms to form a group take up an orientation at random. Adjacent atoms will “grow” beside the first, assuming orientation in the same way that a domino game develops block by block.

lf we caused crystallization in a piece of metal from a single starting point the resulting perfectly ordered single crystal, if it were free of defects, would be about a hundred times stronger than ordinary structural materials. This is possible only in the laboratory, since normal conditions result in a polycrystalline material that contains millions of defects on the atomic level. A very slow growth rate like 1mm per day requires deposition of 100 layers of atoms per second. When you consider that our ingot is recrystallizing in a few seconds, it is no wonder that the organization has more than a few irregularities.

Illustration 2 shows a stylized close-up view of this area. Notice that the pattern is interrupted. As the crystals grow they impinge on one another causing grain boundaries made up of dislocations. Together with vacancies, these are part of what allow a metal to be deformed. When stress is applied (e.g., when you draw a wire) the crystals slide over each other in a behavior that is characteristic of metals. 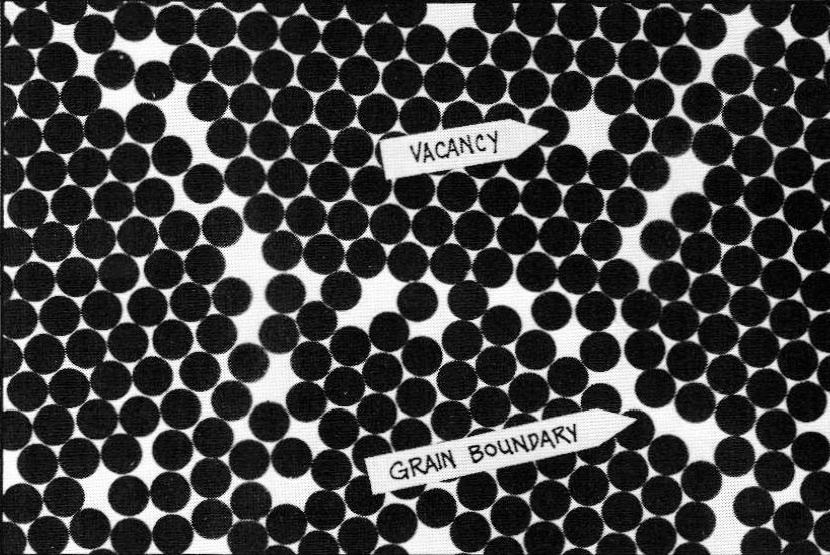 In this stylized model each circle represents an atom. This junction of four grains shows how the patterns impinge when they meet, causing grain boundaries comprised of “dislocations.” Note also the mid-grain vacancies.

Another important factor in malleability is the structure of the crystal itself. There are seven distinct lattice systems, the greater the symmetry of a crystal, the easier it will be to deform the metal. One of the lattices that allows for easy movement in any of three directions is called face-centered cubic. Given the extreme malleability common among them, it’s not surprising that this crystal arrangement is shared by gold, silver, copper, lead and aluminum.

Another factor in the microstructure of metals is grain size and its related factor, boundary development. The dark line in the lower part of the first drawing shows the edge where one crystal meets another. This is called the grain boundary. A material with small grains will have more grain boundary than one in which the grains are large. Since boundaries have a lot to do with the mechanical properties of a metal, their growth becomes very important.

Grain growth is a function of time and temperature. When we last checked our ingot of sterling, the crystals were beginning to grow. As neighboring clusters bump (technically, ‘impinge”) into each other a grain boundary is formed. Lf many clusters are forming simultaneously in a small space they won’t have a chance to get very large before they impinge on one another. On the other hand, if the cooling is slow, fewer seed crystals (called nuclei) are formed and each cluster can grow to a larger size. This is why we heated the ingot mold. The slow cooling will cause slow recrystallization, which in turn will yield larger crystals, which means fewer grain boundaries, which means a more malleable structure. Now, isn’t that easy?

No, as a matter of fact, there’s a rub. The large-grained structure has less strength than a fine-grained one. It is malleable but weak. Our first step after pouring the ingot then is to break up the grains into a smaller size, Cold-working by lightly planishing the ingot will increase the strength of the metal. One or two courses of planishing should do the trick.

Now the ingot is annealed. Increased temperature will stress relieve the ingot. We need to heat the ingot to the point where the atoms are mobile enough to reorient themselves into a less stressful structure. For sterling we’ll heat to around 1100°F (593°C) which is a dull red color as viewed in dim light. Heating above this point has no advantage. After bringing the metal to temperature, we’ll hold it there for a few seconds to allow the annealing to occur.

After allowing the ingot to cool for about a minute we could safely quench it; the quenching medium would have no effect on the structure. We could planish or roll the ingot until it work-hardened, when we would repeat the annealing as before. We would continue until the resulting sheet was the desired thickness.

Let’s further suppose that we have cut this sheet into a number of cunningly clever pieces and want to solder them together. The rules for soldering are familiar, but how much do we know about what’s really going on in there?

Since most metals have a tendency to combine with oxygen and since this tendency is accelerated by heat, as soon as we turn the torch onto the metal we create a skin of oxide that will interfere with soldering, We usually prevent this from happening with a compound that will absorb the oxygen before it can combine with the metal. This is called flux, from the Latin word meaning, “to flow,” which is what we want the solder to do.

As we heat metal its atoms become agitated and move faster. With increased heat the atoms are further apart: we observe that metals expand with increased temperature. Lf a liquid is brought into contact with a structure like this, its fluidity acts to draw it up into the joint where some of the solder diffuses into the work-piece.

A solder is chosen to melt at a temperature that gives appropriate diffusion into the pieces to be joined. When heat is removed the solder will recrystallize. Since the bond of the solder is integral to the metal, the joint is very strong.

Understanding the physics of microstructure can help the metalsmith to better ply his craft. A similar knowledge of chemistry and thermodynamics will come in handy as well. Beyond the practical benefits, this kind of investigation is fascinating all by itself and manages to extend the pleasure of working with metals.