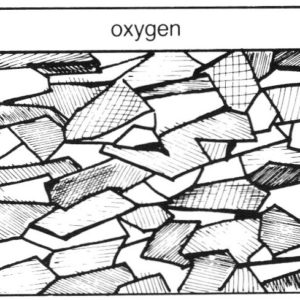 Technical Briefs deals with technical concerns of interest to a wide audience, addressing topics as diverse as vanguard technology and ancient arts. It will also answer questions from readers and respond to suggestions, always trying to explain in simple terms the magic and wonder of working with metal. For this article, Tim talks about dealing with firescale.

I have been plagued by firescale that appears after machine polishing. I’ve read articles on the subject but nothing solves the problem. Abrasion removes the scale but is time consuming and wastes metal. If you have a safe, quick and reliable method, I would be most appreciative.

Your use of the word “plague” in connection with firescale is familiar. Your frustration has been shared by many smiths over the years. Other articles in this magazine have described in detail the complex reaction that causes firescale. I can’t improve on those reports, but for the benefit of recent readers let me begin by summarizing.

What You’ll Need To Deal With Firescale

As an Amazon Associate, we earn from qualifying purchases referred from our site.

Firescale is produced at high temperatures in the presence of oxygen. The rate of its penetration is influenced by the length of time the metal is kept at elevated temperatures. Oxygen combines with copper to form the blackish compound cupric oxide, CuO, and the reddish cuprous oxide, CuO2. Firescale is formed when increased energy (in the form of heat) encourages the formation of copper oxides. In sterling and some gold alloys this can result in stains within the metal. 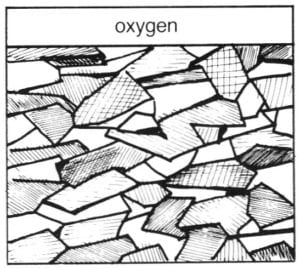 The numerous grain boundaries slow down the flow of oxygen into the metal.

I know of no good way of removing firescale. The stain is a contamination within the metal; there is no solution but to dig it out or cover it up. Plating over stain has the disadvantage of potentially wearing off articles that are to be worn.

Further, when it comes to digging the stain out, no method is a good one. As you mention, sanding is time-consuming and wasteful. An alternative that is sometimes preferred for heavily textured surfaces is called bright dipping. This technique uses a strong acid solution (usually nitric/water, 3/1) to remove the metal down to the stain. This is faster than sanding but is no less wasteful of metal. Because the acid attacks solder faster than sterling, this method poses special problems for objects fabricated from many units.

The best solution to the problem of firescale is to control and minimize the factors that create it in the first place. Proper use of the torch can go a long way toward keeping firescale under control.

Heat the workpiece only to the point where solder will flow. Remember that it might take a brief time for heat to flow completely through a piece. Think of soldering in terms of heating by stages. Warm the whole piece to 1100°F. This is indicated when Handy Flux loses its reddish brown color and becomes colorless. Lift the torch an inch or so for a split second to allow the heat to soak through the workpiece, then continue heating. Heat to a dull, barely perceptible red, then again lift the torch very slightly for a couple seconds to allow heat to soak throughout the workpiece. Continue in this way until the metal is brought to the point of solder flow. Then stop. Do not heat the metal above this point. This subtle process is better than heating the metal in a headlong rush. Focusing the flame on a single point until the solder flows will probably overheat some sections. At the same time, avoid prolonged heat. The stage-by-stage approach to soldering is relaxed but should not be drawn out too long. Use a flame large enough to complete the job efficiently. 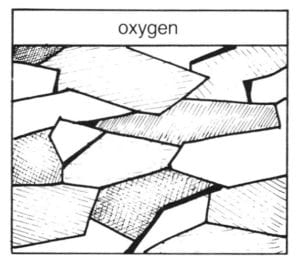 The large grains facilitate the infusion of oxygen.

The soldering heat should be a neutral or reducing flame. This refers to the relative volumes of fuel and oxygen around the flame in a neutral flame most of the oxygen in the vicinity is being consumed in the fire. In a reducing flame excess fuel is present to “mop up” surplus oxygen. Working in a reducing environment, for instance on a charcoal block, increases this effect.

The real bad guy in the firescale scenario is oxygen. Proper soldering will limit the amount of oxygen that reaches the surface of the metal. This is achieved commercially with furnaces that produce an inert atmosphere such as argon gas. Annealing is often done in liquid salt.

Handcrafters rely on the chemical action of flux. You might think of flux as a sponge that picks up oxygen before it can get to the metal. Some fluxes are better at absorbing oxygen than others. The watery, fluoride-based fluxes like Battern’s (these are usually green or yellow) are light-duty fluxes. They are best suited for quick operations on metals such as gold or fine silver that are not prone to heavy oxidization. Paste flux, of which Handy Flux is the most popular example, offers better protection against the penetration of oxygen. For soldering jobs that require a good deal of heat for a sustained time, apply a thick layer of flux. An example of this would be a large sterling object being joined with hard solder.

Fluxes that combine trisodium phosphate, borax and boric acid create a tough shield against oxidation. Prip’s flux and Cupronil are examples of this kind of flux. These are best applied by spraying. Warm the metal with a soft flame and spray on the flux. It should make a white crust as it hits the metal. Reheat and spray again. Work in a ventilated area and avoid breathing the fumes being created. Continue this operation at least five times, until the crusty coating is uniform and about a millimeter thick. Since this flux does not aid solder flow many smiths brush a line of paste flux along the seam. Soldering is then completed as usual. Warm pickle will be needed to remove the flux layer.

At temperatures above 1100°F the silver in sterling facilitates the movement of oxygen through the alloy* (“High Temperature Oxidation of Sterling Silver”. Joe A. Hall, MFA Thesis, 1981.). Oxygen flows better through silver than copper oxides. Grain boundaries in sterling harbor the oxides. As shown, large-grained structures present fewer barriers to slow down the spread of oxygen. They are more susceptible to firescale than liner grained samples. Large grains are created by prolonged high temperatures. This is one of the reasons to keep soldering and annealing operations as brief as possible.

Send questions for this column (double-spaced, typewritten) to:

All articles by this author
Previous Metalsmith ’86 Spring: Book Reviews
Next How to Construct a Portable Photographic Studio
Social media