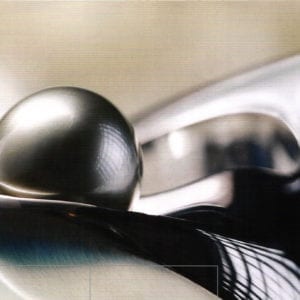 “The saying “beauty is in the eye of the beholder” could scarcely be more relevant that in the creative sector. Painters, illustrators, designers and photographers alike all view the things and beings around them with their own individual perception of beauty. It’s exciting when one creator views the products of other creators through their own eyes. 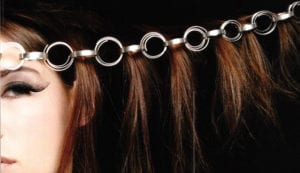 It’s not the jewelry that is placed in the foreground but a play on the jewelry: the photographer has successfully created a picture motif through various experiments and the desire to elaborate on the form, materiality and distinctiveness of the chain. Photo: Juliane Werner, jewelry: Zugck & Oechtering, Berlin, model: Nicole Pietsch (IZAIO Models) Make Up: Milena Chudy 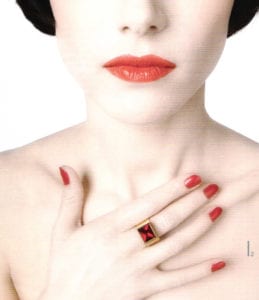 The directness of the jewelry and of the image combine to create a commonality, as do the color of the gemstone and the make-up. Photo: Kareen Kittelmann, jewelry: Eigenart Schmuckgestaltung, Berlin, mode: Claudia Grasse, styling: Milen Chudy

It was no easy task that awaited the 20 participants of the current photography design course at the renowned Berlin Lette-Verein. The young trainees, who complete three years of study at this 140 years old establishment in the center of Berlin, were set the task in their 2nd year of photographing the creative works of Berlin-based jewelry designers. “In addition to technical and design content, the link between culture and practice is at the heart of the design course,” says Rainer Schwesig, semester leader for the year group and himself a freelance photographer. He is responsible for defining and implementing topics at the Vocational College of Design and has arranged and supervised practical cooperation work between his students and goldsmiths at the Aurum exhibition company. It became clear to students right at the beginning of the assignment that there is little sense in arguing over taste – that of the jewelry designers and customers included. 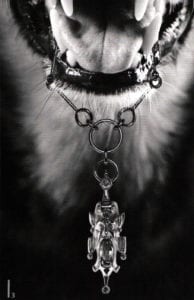 Mythical inspiration: The legends surrounding amethyst are just as mysterious as jewelry itself. Plinius wrote that the stone was worn around the neck on a cord of dog hair and gave the wearer protection and strength in the face of evil demons. Photo: Lars Herzinger, jewelry: Master goldsmiths Cottmann + Ludwig, Berlin

The students, who had had little to do with jewelry design until that point, were spoilt for choice when it came to selecting the items they wanted to photograph. Was it better to choose something which tied in with their own personal taste or perhaps a piece of jewelry which could be spectacularly staged and effectively shot, even if it wasn’t the photographers own personal favorite? 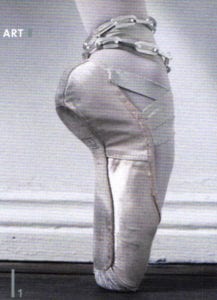 The chain, often a symbol of beauty, wealth or love, also has a more somber side to it – that of imprisonment and slavery. The photo was inspired by ballet which requires the complete devotion of the dancers and unconditional adherence to the choreographed routine. Photo: Joachim Riederer, jewelry: Bodo Dilg, Berlin, model: Marianne Illig (Corps de Ballet from the Berlin State Ballet) 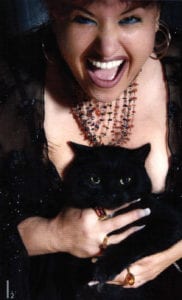 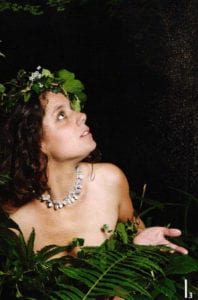 “Produce image shots showing two different interpretations of designer jewelry,” was the specific brief given to the budding photographers who could choose whether they wanted to photograph the necklaces, bracelets and rings as stills or on a model. Kareen Kittelmann opted to stage her piece – a highly graphic gold ring with an impressive large red stone. The photo shows a symmetrically arranged torso/face shot of a model with extremely pale make-up and fingernails and lips in the exact same shade of red as the gemstone. “The ring is characterized by its absolute directness and clarity. The choice of model as well as the recurrence of the lines and colored elements is intended to emphasize the character of the piece. As such, the model should not detract from the ring but instead reinforce the strength it exudes,” says Kittelmann of the motivations behind her selected composition. The different photographic works produced as part of the assignment document this: sometimes the items of jewelry are in the foreground and sometimes the stories they tell. One such example is the work of Sandra Hartleb. She selected several gold rings bearing different colored gemstones produced by Berlin master goldsmiths Cottmann+Ludwig and put them on both of the model’s hands. “The idea was more to tell a story around the rings than to feature the materiality of the jewelry in the foreground,” she says of the pose adopted by her lavish model who is laughing, relaxed, into the camera as she strokes a black cat. 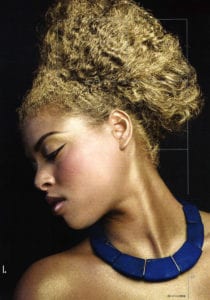 The name of this lapis lazuli and gold chain – Nofretete – was the inspiration for the photographic composition. This Egyptian-themed image focuses on the model and make-up. Photo: Johanna Landscheidt, jewelry: Zugck & Oechtering, Berlin, model: Billie Ruse

Jewelry tells its own story

Aviel A. Avdar resolved to tell a romantic story with the jewelry piece he selected – an organically formed silver ring with dark shimmering Tahiti pearls by Ralph Munchow. Something different happened: “As soon as I held the ring in my hand and studied it, I knew it would be difficult to tell a story without neglecting the characteristics of the ring, its irregular form, the shiny and matt surfaces, the pearls and all its finesse”. After numerous attempts, Avdar finally decided against the romance theme and created a purely factual photograph to do justice to the bizarre shape of the jewelry and its different materials and their reflections. Budding photographer Marius Glauer daringly created a composition which would certainly not be to the taste of a jewelry overs. He selected a red coral chain with tiny white pearls from the various items of jewelry on offer and displayed this together with an octopus on a shiny reflective dark surface. 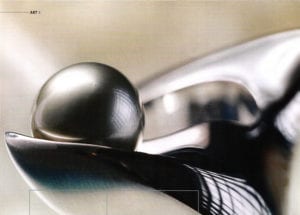 “The One” – Factual photography instead of romance. Photo: Aviel A. Avdar, jewelry: Ralf Munchow, Berlin 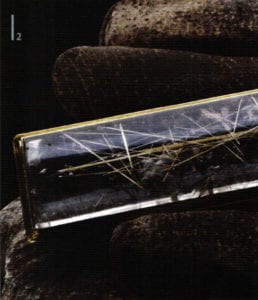 For his photograph of a brooch made from rock crystals with rutile nails and a yellow gold setting, this photographer created a mining atmosphere to reflect the origins of the stone. Photo: Florian Duffner, jewelry: Detlef Isert, Berlin

“My photograph brings together two noble creatures of the sea, the coral and the octopus,” says Glauer of the inspiration for his work. “The perfected work of nature created by the goldsmiths and the octopus with its special, unique shape are an example of the multi-faceted and aesthetic life living in our oceans”. Glauer also wants his photography to serve as an appeal to people to respect the creatures of the sea. 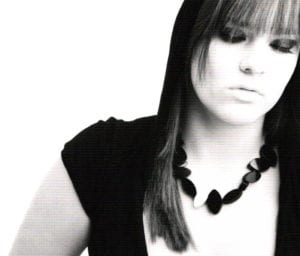 “Every design process requires a critical examination of the culture of the past and present as well as of the forms of the current aestheticization of the natural world,” says semester leader Rainer Schwesig of the idea underlying this themed assignment. There are still lots of challenges to be overcome before each trainee photographer has found his or her own unique style. One of these is the exhibition of all the jewelry photographs produced during the semester at the GOLD 2007 jewelry trade fair (in Berlin from 8th to 11th November 2007) where designers and visitors will come together to cast their critical eye over the photographic works.