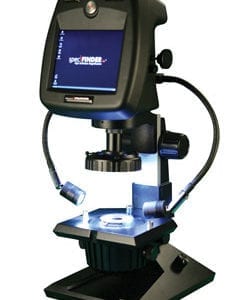 When a maid steals a $250,000 gold and diamond necklace from a famous rapper’s hotel room, only to find that those diamonds are actually CZs, it puts the hotel manager in a state of panic. Sure, he feels good about recovering the stolen necklace. But how does he prove it’s the same necklace the rapper paid a quarter of a million dollars for, thinking it had white and canary diamonds set in it?

Simple. He takes it to Gary Smith at Pennsylvania Gem Lab for testing.

“I have the only forensics lab in the jewelry industry,” says Smith, owner of the Montoursville, Pennsylvania-based lab that does metals and gemstone analysis for the government and the Jewelers Vigilance Committee, among others.

Smith’s task is to prove that the necklace recovered by the hotel, which had begun to have the stones punched out of it, is the same necklace that the rap star wore in his act the night before the theft. In addition to conducting standard DNA analysis, Smith uses the SpeckFINDER to ensure the broken stones match the seats in the metal-proving they are the original stones that were set in the necklace.

Smith is one of many technical advisors who helped Dazor Manufacturing Corp. in St. Louis roll out a jewelry-industry-specific version of its high-definition digital microscope this year. Launched in 2004, the SpeckFINDER HD is a high-resolution system with a built-in computer. It was originally designed for the industrial field for use in examining tiny components on printed circuit boards to assure quality control. It soon crossed over into other fields, such as forensics, where it is used for tasks such as fingerprint identification and handwriting analysis, as well as the medical field, where it’s used in the manufacture and inspection of devices such as pacemakers and catheters.

Today, with the addition of a gemological base and special lighting solutions for gem inspection purposes, it’s being marketed to the jewelry industry as a fully functional workstation for digital computer microscopy designed to ad-dress the shortcomings of traditional optical magnification. Diamond Trails Are Forever 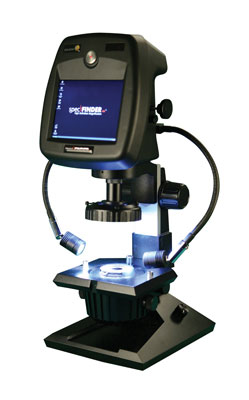 “Conventional microscopes are not comfortable viewing environments for extended periods of time,” says Stan Hogrebe, president of Dazor. “Over the past 10 years, we’ve had an acceleration of technical development in the areas of digital cameras, flat-panel displays, and single-board computers, to the point where the resolution of an image produced on a flat-panel display can be very high. By combining this technology with high quality optics in the SpeckFINDER, we make it more comfortable for the user to view magnified images on a screen, and give him or her the ability to process those images with a built-in computer.”

Designed for use by gemologists, appraisers, and retail jewelers, the gemological SpeckFINDER has a magnification range of 1x to 90x with the user’s choice of optics. While the system has multiple uses, Hogrebe says one of the biggest benefits end users note is in the area of diamond inspection.

“Traditionally, the primary way to document certain identifying characteristics of a diamond is to hand plot the inclusions, which is time consuming,” says Hogrebe. “With the SpeckFINDER, you can magnify the inclusions and photograph the diamond from various angles to document them, creating a pictorial record for the stone.”

This documentation can be used in a gem lab environment when certifying stones, at retail for insurance, and in manufacturing facilities for tracking purposes.

Branko Deljanin, president of Canadian Gemological Laboratory in Vancouver, British Columbia, Canada, acquired his SpeckFINDER when he opened the lab this summer, and uses it primarily to take high-resolution photos of diamonds during grading. He puts the photos on diamond grading certificates and Damaged Diamond Reports, and also e-mails the images to his customers. “Because most of our customers are wholesalers, they find the images useful to e-mail to retail clients or put on the Web,” he says.

The images are also proving to be useful tools in the retail sector. “When someone comes in with grandma’s heirloom to have the stone re-set, you can point out the unique properties of the customer’s diamond on the SpeckFINDER and print out a photo for them,” explains Hogrebe. “With this documentation, you give the consumer confidence that you will not switch the stone, and you provide insurance for your business from fraud schemes.”

Smith sees this use for the Speck-FINDER particularly apt in today’s market. “With so many consumers selling gold, there is a lot of fraud going on right now, and it’s eroding confidence in our industry,” he says. “When you can examine pieces in front of the customer using the SpeckFINDER, photograph the pieces, and download the images to your network, you can prove that what you got is what you’re giving back if you don’t buy it. It’s the same situation when taking in repairs for diamonds-you can assure the customer that their diamond is going back to them.”

In a manufacturing operation that processes diamonds, the technology is proving itself as a solution for tracking stones. After providing on-site demonstrations, Hogrebe has piqued the interest of and made sales to factories in India, where a high percentage of the world’s rough is manufactured into polished stones. “With thousands of workers in these factories processing diamonds, there is a need for inspection and documentation at each step of the manufacturing process,” he says. “The ability to use the SpeckFINDER for quality control along the way, and to contemporaneously capture images of polished stones before they are shipped and save them to a network, is critical to tracing the path of the diamond… [and] mitigates the likelihood of a dispute arising about misrepresentation or fraud.”

In addition to being beneficial for diamond documentation and tracking, gemologist Deljanin says the Speck-FINDER is a useful education tool that he has started to take along when he travels. “When I do lectures on gemology around the world, it’s easy to put a stone into the SpeckFINDER and project the image on a large screen so multiple people can view it at one time, as opposed to having each person step up to view it in a microscope,” he says. “I can clearly show 30 people at a time diamond inclusions, treatment characteristics, cut features, and more. It’s a great teaching tool.”

Hogrebe sees the training aspect of the SpeckFINDER being even more important with the current generation of students entering the jewelry and gemological industries. “These folks are used to viewing everything on a screen-from plasma TVs to iPhones,” he says. “If given the choice between using a centuries-old microscope or sitting in front of a screen with a built-in computer, they’re going to opt for the latter.”

Considering its suitability for working with diamonds and for gemological training, it’s hard to believe the SpeckFINDER wasn’t originally designed for the jewelry industry. But, like so many other products, it’s a crossover technology that was brought into the industry with the input and guidance of those in the field.

“Rarely does the jewelry industry ‘invent’ technology purely for our use,” says MJSA Thinking Ahead Awards judge Michael Coan, chair of the jewelry design department at Fashion Institute of Technology in New York City. “It has been our great fortune to have products such as the SpeckFINDER adapted to our own varied and special needs.”

Refinements to the system, such as replacing the wire stone holder with a vacuum stone holder that would not impair the image, are ongoing, reports Hogrebe. For example, Dazor is currently in discussions with Quantum Leap appraisal software developers to enable the two systems to speak to each other. “Since so many appraisers use this software, we want to make it easier for them to incorporate the SpeckFINDER,” says Hogrebe.

According to one Thinking Ahead Awards judge, there may be another industry-specific application for the SpeckFINDER that Dazor should consider. “This should be a very useful tool for the inspection of as-cast surfaces and the documentation of casting defects,” says Joerg Fischer-Buehner of Legor in Bressanvido, Italy, and Indutherm GmbH in Walzbachtal-W?ssingen, Germany. “Bad documentation is a common problem in communication between customers and suppliers.”

It appears the applications of this technology in the jewelry field are numerous-and growing-putting a bright future for the SpeckFINDER in clear view.