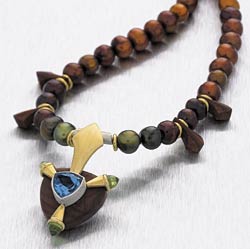 Until 10 years ago, global economic sanctions against South Africa generally forced South African companies to keep their manufacturing in-house out of necessity. Post-apartheid, after sanctions were dropped, the rand remained relatively weak against most foreign currencies, again necessitating domestic manufacture.

It comes as somewhat of a surprise, therefore, to hear that the consensus among South African jewelers is that there aren’t enough of them in the first place.

It comes as less of a surprise to hear that the industry is highly polarized, and the gap between high and low end markets â as well as the gap between traditional and contemporary design â is widening not closing. While a visit to any mall reveals a plethora of jewelry stores, these tend to cater to a higher-end clientele, whether local or tourist. People with serious money want serious jewelry and will pay extra for 18K gold, good stones, name designers, and status packaging. As a result, small but highly successful jewelers like Charles Greig and Jenna Clifford do well no matter what the economic climate.

Donald Greig, one of three brothers who co-own and manage the Charles Greig chain’s six stores, talked about business in Africa and the current trends they are following. “We are seeing a big upswing in colors again â rubies, sapphires, emeralds â all bright, strong colors are doing well across the board. Tanzanite is huge, of course, and other pastels are doing well also, particularly pinks and pale blues. We are also selling a lot of big stones â as in 30 carats or more. People are wearing these and no other jewelry. They become fashion statements or signature pieces. And, of course, colored diamonds are fantastic, except we have trouble getting them. As for cuts, the new checkered top cut and the briolette are popular,” said Greig.

Others, like American Swiss, the huge commercial jewelry branch of the even larger Foschini Group, tackles the lower-end market, selling similar-looking traditional gold jewelry, but rendered in 9K, not 18K, gold. With 180 stores in southern Africa and its inexpensive price points, American Swiss does well in the manufactured jewelry niche. And, impressively, at least 70 percent of the jewelry sold by American Swiss is still made in South Africa, with only 30 percent imported from Italy, China, and other countries.

Somewhere in the middle languish the individual and more adventurous jewelers and designers. While there is no shortage of talent and artistic vision among these, there is a marked shortage of galleries or retail venues willing to take on the more unusual and forward-looking designs.

One place with an edifying display of local talent is Cape Town’s Blue Ice. This tiny corner shop in the Gardens Centre Mall showcases several of Cape Town’s more interesting designers. One of these is Linda Cameron-Dow, a jewelry tech who teaches workshops at the Cape Peninsula University of Technology. Her line, called IKONZ, features both charming and charm-like necklaces and earrings displaying tiny colored pictures of everyone from Frieda Kahlo to Marilyn Monroe to the Virgin Mary behind tiny bits of glass in minute silver frames.

While her pieces are deliciously witty and inherently attractive, Linda is aware that in conservative South Africa they are still a little “over the top” for most people with disposable incomes. Which is partly the rub â at between R1,000 and R2,000 rand each (approximately US$160 to $320), her pieces are too expensive for most students and free spirits to afford, and too young and free spirited for most of those who can afford them.

A giant step down in terms of capitalization and marketing, if not necessarily in terms of talent or initiative, are the jewelry makers to be found in the informal settlements and poorest neighborhoods. These are people like Yanga Mtshizana, who sits in his cardboard and plastic house under a bare light bulb, making necklaces and earrings to sell to tourists. His working conditions may be primitive, but there’s nothing wrong with either his work or his desire to make beautiful things to wear. He is rightly proud of owning his own business and adding to his regular income.

All of which adds up to an even greater need for initiatives like Vukani Ubuntu. Because apparently, at least in South Africa, the more jewelers, the better.