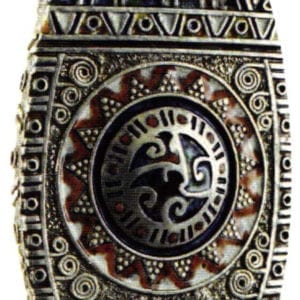 Serik became acquainted with enamel while studying at college. He graduated in 1988 with the specialty of “Art Processing of Metal.” Later he became a professor at an art college and he worked mainly in painting. In 1991, he started making jewelry and began to incorporate enamel into the jewelry in 1993.

His jewelry works are sculptural in composition and the enamel is partitioned between the metal. He still does a lot of painting but finds enameling to be a golden mean between painting and metal. The enamel colors have deeper tones with transparency and the material is far more durable. 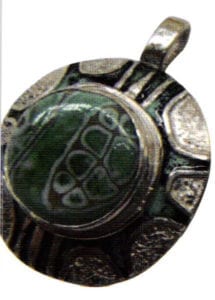 He will fire his work one to ten times depending on the composition of the piece. He will lay out the dark background, then lay more bright colors and continue the work until he feels he has reached perfection of color and tone. He likes the combination of black with other colors. Often different shades of dark blue are used. He likes warm colors, shades of ochre, brown and red. Both transparent and opaque enamels are sometimes used on the same piece. He will usually work from sketches which are sometimes transferred to the metal. 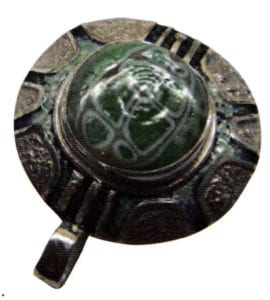 Serik has a workshop in his house. There are several tables, a workbench, equipment for jewelry work, and an enameling furnace, however, much of his enamel work is fired with a torch.

His work is inspired by sculptures, nature, architecture, photographs, and television. These inspirations are internalized for consideration, then put on paper as his ideas are transformed. Also, drawing and redrawing in a notebook, directly on paper is another way his ideas come to life. Traditional Kazakh Art and modern art of the world has been a great influence on his work. 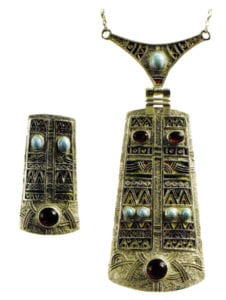 Serik sells his work in galleries, exhibitions and fairs. He is a member of the union of artists of Kazakhstan. For the last two years he has attended the International Enamel Symposium in Kecskemet, Hungary. His work has been exhibited in exhibitions and galleries. He also has a small salon. He has three students who work with him in his workshop.

For the future he wants to try out new techniques, new materials and new sculptural and colors choices and decisions. He would like to work on larger panels for wall installations.