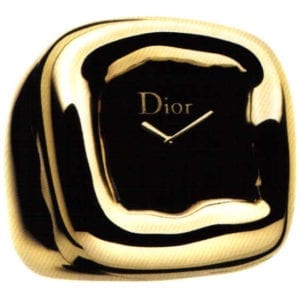 Discretion is everything: ingenious designs conceal watches inside items of jewelry or accessories. The forerunners of these secret timepieces can be found in the annals of watch history. 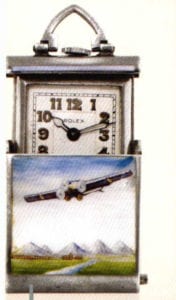 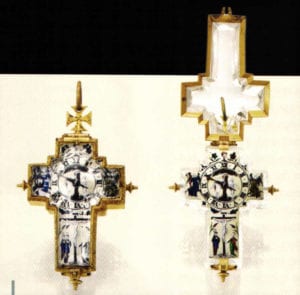 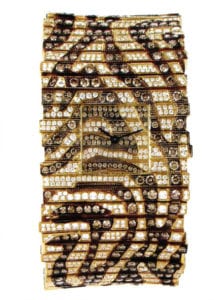 The fashion for wearing watches on the wrist is a mere one hundred years old. It was not until the beginning of the 20th century that more and more people found it practical to be able to read the time on their arms. A short glance was enough, whereas a pocket watch had to be removed from the waistcoat or jacket pocket. There was no better way of indicating to a conversation partner that your mind was elsewhere.

The success story of the wristwatch is consequently one with a basis in discreet, comfortable usage. Legend has it that it was an unknown nanny who first found it more convenient to secure the watch to her wrist with a strap instead of wearing it around her neck on a long cord. Another source has officers approaching a Swiss watchmaker with the idea for a watch to be worn on the wrist. 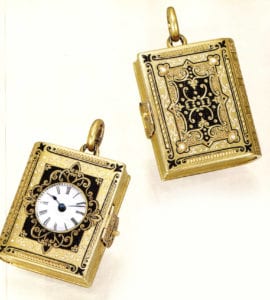 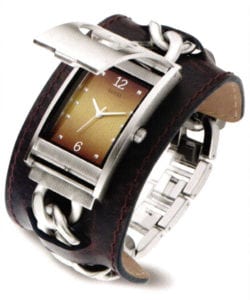 Time under a lid: ‘Pierced beauty’ by Guess 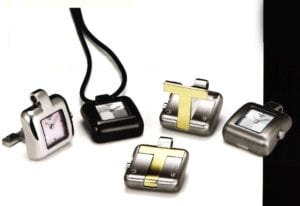 For putting on or putting up: ‘T-Pendant’ by Tissot

Fact is that the first historically documented wristwatch was a ladies’ model from the year 1868, created for the Polish Countess Kocevicz by Patek Philippe and scarcely copied at the time. The timepiece took the form of a bracelet of gold and diamonds and boasted a dial concealed by a cover.

Concealed dials such as this are still found today. Because in spite of the triumphant march of the wristwatch there are still those who search for a different, more fashionable, original or decorative way of wearing a watch. These wishes are addressed in the form of the original designs of the watchmakers: with mini watch pendants on charm bracelets (for example those of Burberry, Fossil, Swatch and Guess) or an ornamental necklace (Marc by Marc Jacobs, Tissot), with masculine straps and dials concealed beneath a decorative flap (Fossil) or a precious jeweled creation in which the dial almost disappears beneath a pattern of diamonds (Chopard). Watch enthusiasts can choose from a range of models in all prize brackets, all of which present wearable time in new forms. 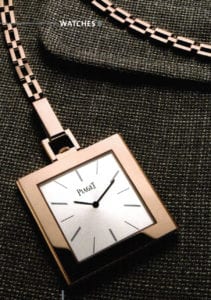 Swappable: this charm bracelet by Swatch can be extended so that the watch can be worn on the arm or around the neck 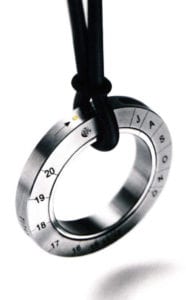 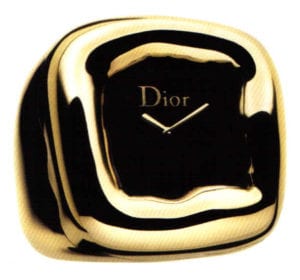 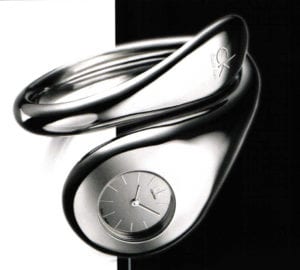 Manufacturers can draw inspiration from the imagination of the watchmakers of past decades and centuries. Because the art of wearing watches in a concealed or overtly decorative manner comes with a history. Historic timepieces such as these in sumptuous rings or glamorous necklaces, in the form of crucifixes or even miniature books are still highly sough-after. At Antiquorum, a Geneva auction house specializing in watches, astonishing articles often come under the hammer: a serpent ring with swiveling head, under which a dial is revealed, a ladybug ring with wings that move to the side or an angular pendant with illustrated flight scene from which a watch can be withdrawn. A further eye catcher is the ‘Ursula Andress Ring Watch’, created in 1972 by  the British jeweler Andrew Grima using an Omega movement. Antiquorum sold this handsome ring in July 2007 in Berlin for over 220,000 dollars. The jewel is very much in the style of the seventies: a monument in platinum, the peaks of which are set with diamonds, framing a tourmaline with the green of an alpine lake, beneath the clear surface of which a dial can be seen. The extravagant timepiece is named after its first owner, the actress Ursula Andress, who rose to fame as the first Bond girl in the 1962 James Bond film ‘Dr. No’. Inside the ring watch ticks a tiny movement the result of centuries of development and continuous miniaturization. Because it is only thanks to the efforts of inventive watchmakers and inventors that clocks were able to leave the church tower, first entering houses, then, as watches, the waistcoat pocket, before finally making their way to the wrist. 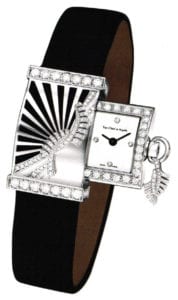 Fine jewelry to tell the time by: white gold watch; ‘Secret Etincelles’ by Van Cleef & Arpels with diamonds and mother of pearl face 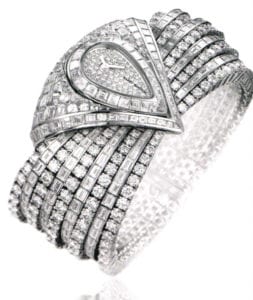 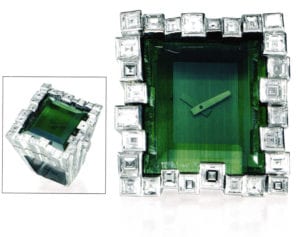 ‘Ursula Andress Ring Watch’ by Andrew Grima with Omega movement. Platinum with diamonds and tourmaline. Sold in July 2007 by Antiquorum for over 220,000 dollars

Oddly enough, the functioning principle of the first church tower clocks of the 13th century corresponds to that of the mechanical watches of today: a gear train was supplied with energy, measured out by an escapement or regulator in such a way as to move the hand in accordance with the time elapsed. Where this principle remains unchallenged, the materials used were improved and the individual components increasingly miniaturized. An important step on the path to the wearable watch was the use of a metal spring to store energy in place of the weights used in large clocks. The spring, actually just a metal strip, is tautened by the winding of the watch, releasing its energy at measured intervals due to the escapement. It was this development that facilitated wearable watches. These were initially worn around the neck on a chain: at the end of the 15th century small jar or ball-shaped watches could be found, worn around the neck on a cord or chain. In the 19th century the pocket watch came to prominence, surpassed around 1930 by the wristwatch. However, at an early stage it proved possible to make movements so small as to fit into a ring worn on the finger. In 1763 the legendary English watchmaker John Arnold produced such a watch with a repeater chiming mechanism for King George III. Another watch that can be worn as a ring had its origins much further back in history and has a close relationship to nature: wearable sundials can still be found today, enabling the time to be told in any location without mechanical parts or energy. The sole condition is that the sun is shining!

All articles by this author
Previous Color Up Your Life with Gaudy Jewels
Next John Cage: Seeing Sound
Social media