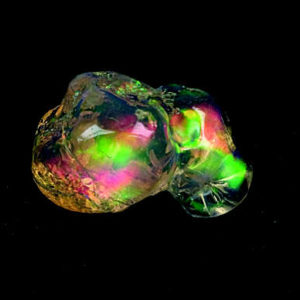 The Revolutionary PolishPlus Process with MiracleMedia is a Shining Solution AJM 2004 Innovation Award Winner: This article will talk about this dry  mass media polishing system and its features.

Marketing gurus use the term “revolutionary” rather loosely. Most new technologies touted as “revolutionary” are more accurately described as “evolutionary,” the logical next step in the slow march of progress.

But “revolutionary” seems apt to describe the trademarked PolishPlus process with MiracleMedia, a new mass finishing technology developed by Peter Richardson of Aurum Plus Resource and Development Co. in San Bernardino, California, to polish, well, just about anything.

“When you see what he’s doing, before and after, it’s clear he’s made a tremendous breakthrough that has applications not just in our industry, but in any industry where friction or polish is an issue,” says author and gemologist Richard Hughes of Pala International in Fallbrook, California.

The culmination of 25 years of research and development, Richardson’s PolishPlus process with MiracleMedia is a dry mass media polishing system that incorporates a patent-protected submicron dry finishing media and special vibratory finishing machines with oscillatory motions of over 6,000 cycles per minute. Providing a typical final polish at the outset, the process continues through successive grits to below 0.02 micron. The oscillation adds a third dimension to the media’s movement, permitting the media particles to bombard the object being polished from multiple directions. Richardson claims the media is long-lasting and safe to use with delicate objects. Since the process doesn’t use water, it produces no pollution problems.

The resulting polish is reportedly comparable to the finest finishes attained on supercomputer, space, and other high-tech components. “My best recorded surface finish thus far was measured at 13.9 angstroms. That’s considered a ‘super finish’ in the nanoscale world,” says Richardson . “Since then I’ve acheived finishes consistently below 10 angstroms. You mention those measurements on gemstones and people in our trade just say, ‘What?!'”

But while it’s those numbers that impress the technology mavens, it’s the dramatic improvement in the appearance of polished gemstones that has people in the gem world talking. “When we first saw this several months ago at the [JCK] Las Vegas show, everyone present in our booth stopped what we were doing and sat with our mouths agape as Peter pulled out one item after another,” says Hughes. “Everyone who was there that day had the same reaction: We have never seen anything as dramatic as this.”

According to Richardson , the process can be used on gemstones as soft as amber and pearls, and as hard as diamond. On diamonds, the process seems to reduce the appearance of yellow in the stones, resulting in higher color grades. “I’ve had several one-third carat stones that started out as G color, and when I was finished with them many experts claimed they looked more like E color, or even D color,” says Richardson .

Hughes speculates that by putting a better polish on the stones, the PolishPlus process is able to reduce light scattering, which can prevent blue wavelengths of light from reaching the eye and thus gives colorless gems, such as diamonds and CZs, a slightly yellower hue.

Other stones respond just as dramatically. Opal produces fire in color intensities rarely seen outside of the finest specimens, and other stones show richer colors. “I did a 2 carat Paraiba tourmaline cat’s-eye and the blue became richer and the eye was much more defined,” says Richardson .

Gemologist Edward Boehm of Boehm Gemological Laboratory Services in Solana Beach , California , a leading consultant to GIA, sees great potential in the PolishPlus Process. ” Richardson ‘s polishing process will eventually raise the bar for the entire gem and jewelry industry,” he says. “The obvious impact on colored gems and diamonds is further complicated by the potential for visual improvement of phenomena [newly seen] in gems. Once the dramatic visual improvements are supported by published scientific data, the polishing industry could undergo significant changeâa change that will benefit every gem and jewelry enthusiast.”

In addition to gemstones, metals ranging from titanium to lead have shown favorable results. “We can take gold, platinum, and brassâeven finished jewelry itemsâand make them look substantially better.” It also works on steel and many exotic alloys, a fact that suggests the process may have many more applications outside the jewelry industry. “What it does to ball bearings and their races to reduce friction is amazing,” says Richardson, who also reports recent success with carbon fiber heart valve implants.

“There are implications for this technology worldwide,” agrees AJM Innovation Awards judge Charles Lewton-Brain of Calgary, Alberta, Canada . “There are [potential] applications in science, medicine, and manufacturing. It’s revolutionary.”

But while Richardson anticipates tre-mendous demand for his media across the globe once word gets out, he is determined to keep this polishing revolution in America.”

I built several companies offshore in the 1980s, and when I look back, I regret it,” he says. “For a change, I want to keep this at home. This is American technology, and it’s going to stay here.”

Richardson says he will offer the polishing process only as a lab service to the trade. To that end, he is currently working on a joint-venture with Pala Inter-national that will focus on high-end colored gemstones, objets d’art, and one-of-a-kind collector, museum, and antiquity items. Another joint-venture is also underway with Diamond Pacific Tool Corp. for the bulk processing of gemstones and other objects. Eventually, Richardson says, he will license the process for other uses.

In the meantime, Hughes predicts the PolishPlus process will have a significant impact on the gem world. “It is the same sort of impact a quantum leap in cutting technology would have,” Hughes says. “Once this is introduced [to the market at large], everything will have to be done this way. This represents the greatest finishing breakthrough since the invention of diamond powders.”