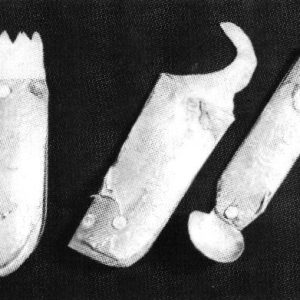 This article series from Metalsmith Magazine is named “Recent Sightings” where Bruce Metcalf talks about art, craftsmanship, design, the artists, and techniques. For this 1992 Spring issue, he talks about Primivitism.

There’s an underground movement afoot in the metalsmithing schools. It’s not organized, it has no manifesto. Instead, the movement seems to be deeply felt but unarticulated responses of hundreds of students to the conditions of their culture. It takes the form of a spontaneous revival of primitivism. By “primitivism,” we generally mean that artists are looking toward non-literate cultures (that were once called primitive or savage) for inspiration and guidance, usually motivated by a sense that these foreign cultures offer something that one’s own social structure does not. Of course, Western artists have been fascinated by the notion of a “primitive,” uncontaminated, uncivilized culture since Rousseau invented the “noble savage.” Of twentieth-century painters, the Fauves, the Cubists and the Surrealists all looked to African and Oceanic artifacts for inspiration and proof of the legitimacy of their efforts. However, the appearance of a primitivist tendency in the jewelry field is new.

Perhaps the clearest evidence of a primitivist impulse is in the sudden explosion of piercing for jewelry and of tattooing in the middle class. Formerly confined to the margins of society, these two practices are now an emblem of rebellion for every mall brat in the country. One could dismiss the phenomenon as another passing fad, except that these are permanent: the hole in the nostril and the tattoo on the shoulder can’t be taken off like an unfashionable shirt. Such emblems are clearly intended to be more than skin deep; they are supposed to be carried for life. It’s no accident that piercing and tattooing are both practices identified with non-Western and non-literate cultures all over the world. 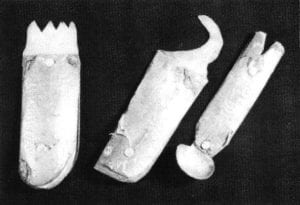 In these cases, the reference to primitivism is (in the words of William Rubin), “a counter-cultural battering ram.” The tattoo and the hole in the body are intended to be combative emblems of difference and dissatisfaction. Raised on television, socialized in shopping malls, the brightest of the generation now approaching maturity sense a vacuum, especially of moral and spiritual values. Young people are looking away from high technology, away from the ministrations of consumer culture, to something they imagine to be more honest, more emotionally direct and more spiritual. So, given the history of a century of malcontents, it’s logical that the new generation of dropouts should look to that dark alter ego of Euro-American civilization: the “primitive.” Neo-primitivism takes several forms in jewelry and metalsmithing. Most numerous are objects that look like they might be used for a ritual in a preindustrial society. They might be rattles, fetishes, indecipherable insignia or big jewelry that look vaguely like something out of National Geographic. From my experience, however, very few of these objects are actually used in a performance or ritual. The other sign of a primitivist tendency is roughly hewed forms, crusty finishes and generally low levels of craftsmanship. Here, the roughness stands for a complex analogy in which unpolished craft equals the ostensible emotional directness of a primitive culture, and controlled craft equals the imprisoned, sick psyche of civilized society.

The problem with these two artistic strategies is that both rely on flawed assumptions about the nature of pre-literate societies as well as some unexamined notions about what we, as citizens of a very highly industrialized culture, can do to recover the “primitive” for ourselves. A cursory study of any pre-literate society will quickly reveal that the idea of an uncivilized society in which all individuals can freely express themselves is pure fantasy. In fact, social life in most of the cultures that we imagine to be “primitive” is highly circumscribed by taboos, rigorous standards of behavior, and a network of obligations within a kinship system. So the idea that we, in our malls and living rooms, have less ability to express ourselves is utter baloney. The analogy of roughness standing for unfettered, primitive emotion is a juvenile fantasy. Similarly, the notion of making a simulated ritual object is equally fantastic. An imaginary ritual proposes no useful solutions to our moral and spiritual crisis; it only proposes an escapist reverie. There’s even a question as to whether one person can actually make up a new ritual, because authentic rituals are collaborative cultural projects that evolve through a number of generations, and cannot be created like art objects by individuals.

As Marianna Torgovnick points out in Gone Primitive, such flawed assumptions about the primitive do not represent our understanding of tribal cultures as much our projections upon them. Aided by a Hollywood stereotype of the other as an exotic, exciting plaything to which we have full access, we create the “primitive” to act as alter ego to the corrupted modern self. Spiritually starved? Create a shaman, a medicine woman, or a totem. Feeling repressed? Imagine a culture where nobody ever tells you what to do. Think that technology has failed? Make up a country with no technology at all, and imagine it to be an ecological paradise. Because we feel rotten, we create an unspoiled Eden out of thin air. The fact that real pre-literate cultures do not resemble such fantasies does not seem to bother most Americans. In the search for authenticity, we construct a totally unauthentic model to emulate.

This is not to say that all primitivist enterprises are stupid and false. Jim Ward, who spoke to the SNAG conference in San Francisco, has participated in a re-enactment of the Lakota Sioux sun dance, which entails being tethered from a chest piercing and eventually breaking through the pierced skin. Of course, such a ceremony cannot be authentic in the sense of being a desperate Native American protest against the incursions of Europeans, but it can be authentic as a search employing pain and endurance to achieve a genuine transcendent experience. Similarly, groups all over the country are reviving and inventing rituals which are legitimate attempts to re-engage the spiritual aspect of life. While we cannot know if the ceremonies actually work, it is possible to respect the seriousness of the effort and the research that serves as a background.

Every generation, it seems, forms a minority that rejects the illusions of modern life and embarks on a search for a more genuine experience. The Dadaists in Zurich, the Situationists in Paris, the Beats in New York and the Punks in London all spurned modern Eurocentric civilization and proposed stripping away the trappings of progress for something unmediated and authentic. At worst, artists and writers in these movements projected their needs onto a helpless population who (conveniently) could not speak for themselves, and made these people into a paragon of uncivilized virtue. At best, the same artists could become students. Study would reveal that, although modern men and women might have much to learn, there are no Paradises on earth.

Bronze clay as a substrate for vitreous enamels

How do I make my drawn wire smooth?

How to smooth edges of blanks?