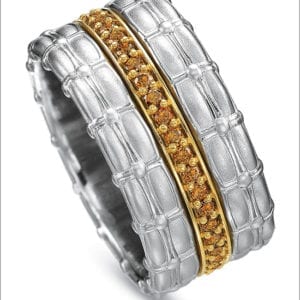 What do you do when you realize your virtual inventory is virtually impossible to manufacture? With so many jewelry designers turning to CAD to realize their visions, such predicaments are becoming more and more common. Those thin edges, tight settings, and tiny details look great when magnified on a computer screen, but try to translate them to cast metal and the reality of physics kicks in.

After the metal has shrunk and worn away under the polishing wheel, suddenly those sharp details have become flat and lifeless-and don’t think about trying to fit a stone in what’s left of the setting.

Even award-winning designs that drop jaws as rendered might have to go back to the drawing board if they want to come to life as real pieces. That was the cast with two CAD designs that took home awards in the 2012 Johnson Matthey New York Sustainable Design Awards competition, which showcased the talent of emerging designers in two categories: Platinum Love and Palladium Expression.

On the article below, you’ll read about how one of these budding designers had to modify his original design to ensure it could be successfully manufactured by Carerra Casting in New York City, which donated casting services as part of the competition’s prize package. From small tweaks to significant changes, this design exemplifies the need to consider and understand the realities of manufacturing when working in CAD.

When Charlie Herner of Green Lake Jewelry Works in Seattle began to work on his design for the competition, he had a clear vision of what he wanted. “I was shooting for a platinum man’s ring with a real masculine feel combined with the light and delicate touch of fine detail,” he says. “Essentially, I wanted a cast piece with a handcrafted feel.”

The design, a winner in the competition’s platinum category, features a row of cognac diamonds set in 22k yellow gold, sandwiched between two pillow — top bands of platinum with a soft satin finish. The pillow tops, framed by thin piping, have a billowy feel to them, and buttons punctuate the band as if to hold the pillows in place. Such details help to make the piece-and it was just those details that were lost when Herner first attempted to mill the design.

“I found that I really needed to beef up the sizes of the pillow tops, piping, and buttons in the platinum bands to get the definition that I desired in the wax and, ultimately, in the finished piece,” he explains. “While everything looked great in the design on screen, the piping was just so ridiculously small that the mill almost didn’t recognize the difference of heights between adjoining surfaces,” he explains. “And while the pillow tops were fine in terms of length and width, I realized that I didn’t build in enough height to ensure that after casting and finishing they would have the billowy effect I was hoping for. I actually had to exaggerate that in my CAD design to arrive at a satisfactory pillow in the finished piece.”

So it was back to the drawing board for Herner, as re — sizing all of the details in this piece meant re — sweeping every surface in CAD. “There is so much going on in this piece from a surface modeling standpointit was a royal pain to rebuild the design,” he admits.

But it was worth it. Initially, the piping was 0.225 mm wide, the pillow tops were 0.125 mm high, and the buttons were 0.125 mm high with a 0.75 mm diameter. He added a tenth of a millimeter to the width of the piping and two — tenths to the height of the pillow tops, and doubled the height of the buttons while expanding their diameter to 1.05 mm. The result: a wax model and casting with the look and feel he had originally envisioned.

With the overall design perfected, Herner built in three key features to ensure the finished piece matched the CAD design as rendered, aiding in the assembly of the ring:

Breaking down the design into three sections-the two platinum bands and the 22k band-he added registration alignment pipes on the inside chamfered edges of the platinum bands so he could precisely match them up when it came time for assembly. “It’s such a geometric piece that if anything is even slightly off you would notice it,” he says. 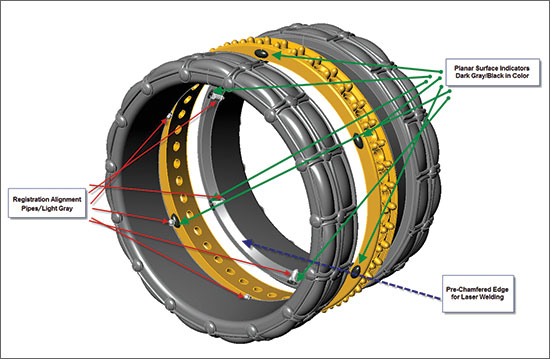 Once the individual sections were finished and the cognac diamonds were set, the piece would be laser welded together. To ensure the best possible weld, Herner pre — chamfered the edges of the two platinum bands in CAD. “This enables you to backfill with laser wire all the way around the ring’s circumference, giving you full depth penetration,” he says. 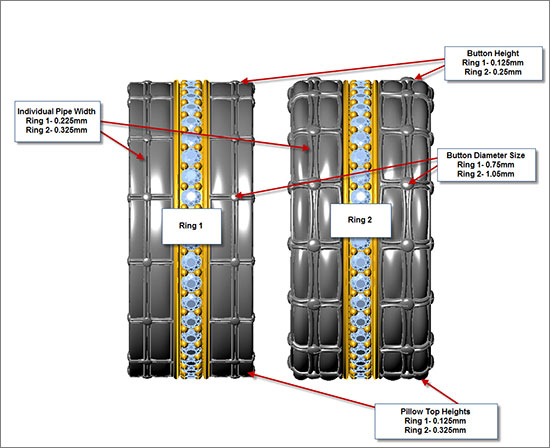 To avoid polishing away too much of the edges of the bands, thus leaving gaps between the three elements, Herner placed planar surface indicators around the band circumferences. “This is an excellent reference for when you need an exact measurement,” he says. “Once they are polished off and you have a smooth surface, you know it’s time to stop.” 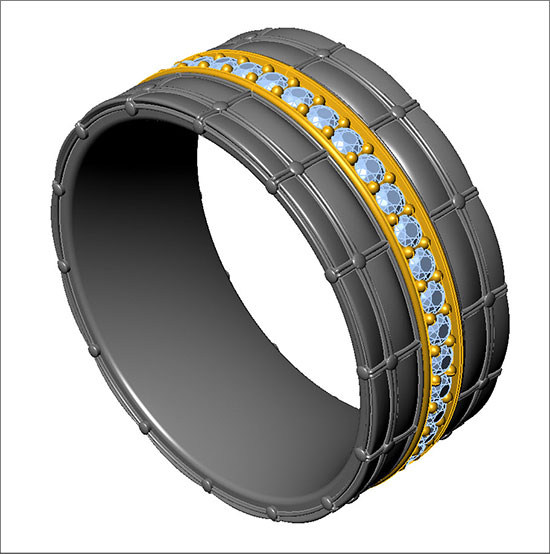