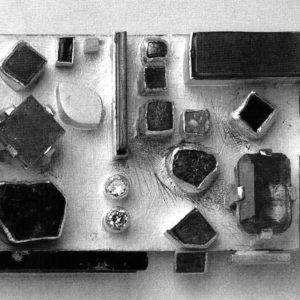 This article is a book review published in the 1997 Fall issue of the Metalsmith Magazine reviweing “Uber den Schmuck und das Machen” by Hermann Jünger.

A kind of grace hovers over the latest book by Hermann Jünger, a paean to making, and a call to arms to hold fast to the meaning in making and even to acknowledge “…making as the basis for human existence, transcending separating barriers….” Together the drawings, photographs, and essays conspire to remind us that without the meaning imbued by the intrinsic value of handwork and a real body to bear them, our creations are as soulless as computer-generated designs.

Although reader will feast on images of assertive chunks of garnet and lapis lazuli elbowing for space on squares of gold, they should heed the text as well. With references ranging from the historic (Theophilus) to the literary (B. Traven, The Treasure of the Sierra Madre), the essays devolve around levels of meaning in the concept of work. Not overlooked is the crucible of the German experience, from Goethe to Stefan Zweig, to the Nazi perversion of the work ethic, and Jünger’s moving descriptions of his artistic coming-of-age in the literal rubble of post-war Germany. Under the guidance of his teacher and mentor Franz Rickert at the Academy of Fine Arts in Munich, Jünger found encouragement for his suspicious that jewelry-making could be more than the technique so highly valued in Europe since the Renaissance.

Twenty-five pages of text and black and white photos precede the first color plate, a muted grey and black brooch, that comes as a fat circle after a forest of verticals in close-ups of the tools of our trade: files, pencils, paint brushes, nails, and saw blades. Drawings, watercolor wash sketches, and renderings, the lively chaos of sketchbook pages familiar to readers of Jünger’s earlier catalogues alternate with lush actual-sized photographs, one or two images per page. 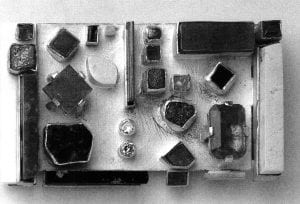 The jewelry pictured was made after 1989 and reveals the aesthetic concerns – “simple forms, in sequence and alignment, or the rich, detailed concentration within a small format” – that have characterized Jünger’s work for over 30 years. His own essay highlights his intellectual underpinnings while pointing up the limitations of the book format itself, that is, “Jewellery only comes to life when worn, makes its impact as the body moves….” As proof, a couple of fluid necklaces shown on models provide an elegant counterpoint to the intimate brooches. Jünger’s comments, written in his own calligraphic hand, thankfully include the story behind a pair of enameled brooches that began with his granddaughter playing in his studio.

At the end of his life, Sigmund Freud was asked what he thought a normal person ought to be able to do well. “Lieben und arbeiten” (to love and to work) is said to have been his terse reply. From the opening images of familiar tools to the tender closing shots of Jünger folded into a chair reading with his grandchild, Jünger at work, and closing with an exuberant back-lit shot of the artist’s wife Jo, this more-than-catalogue documents an artist’s love affair with process and indeed, a celebration of head, heart, and hands.

Marjorie Simon is a metalsmith and frequent contributor to this magazine. She resides in Highland Park, New Jersey.