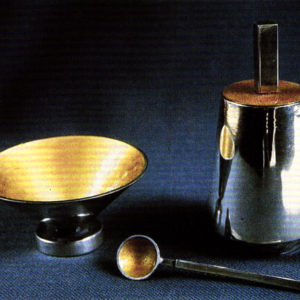 On September 13, 1990, Adda Husted-Andersen, familiarly known as Andy, died in Copenhagen, Denmark, her native land. She was a very special lady with a mischievous twinkle in her eye.

After training in Denmark as a metalsmith, and studying at the Kunstgewcrbeschule in Pforzheim, Germany for one year in 1927, Andy gained expertise by working with international craftsmen and designers in several European countries, including Jean Dunand in Paris. Around 1930, she arrived in New York City where she worked for Georg Jensen, fabricating jewelry and enamelware in her apartment. For the next 30 years, Andy operated an active business, opening her own shop in New York in 1944, which produced a wide selection of chased and enameled objects, holloware, flatware and jewelry. She won ,awards and exhibited her work throughout the United States and Europe.

She helped organize the New York Society of Craftsmen (which became Artist-Craftsmen of New York around 1948), of which she was president from 1941 – 44; established a distinctive silversmithing/enameling program at the Craft Students League beginning around 1933; was a member of the editorial board of Craft Horizons: and, in 1975, become a fellow of the American Craft Council. 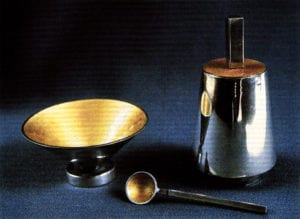 I came to know Andy in 1970. Having recently received an MFA degree in jewelry design and metalsmithing from Indiana University, I wanted some professional benchwork experience and began working at her shop located on First Avenue, a few blocks north of the United Nations. Whereas in former days Andy had employed as many as five fulltime apprentices, she now needed only one. She was planning to return to Denmark to “retire” in a few years and had started to close down some of her accounts. Still, at busy times like Christmas and when large orders were due, other craftsmen were called upon to help.

Early each morning I would open up the shop, and upon Andy’s arrival, we would plan the day. She taught at the Craft Students League, so I would often be left alone to work on commissions, design and manufacture new stock items, take orders, set up the storefront display windows, and so on. Andy had a variety of fascinating customers. So me were long-time clients who came regularly to order unique and beautiful items. Others with limited budgets still wanted to purchase small and precious gifts. She made metal models for aspiring fashion industry designers, repaired and reenameled ancient Egyptian artifacts for the Metropolitan Museum of Art and designed and fabricated presentation pieces for many human-rights organizations, including the NAACP. She opened up her shop to two acoustical engineers from Yale to record the sounds of hand planishing, sawing, filing, raising and polishing. This recording became the background accompaniment to a special exhibit, “American Arts at Yale 1651 – 1971: Selections from University Collections.” Rarely was anyone turned away.

Andy taught me to do my best in the execution of every piece, to be open and discover the wonders of the creative process, to be flexible and take risks, to turn my mistakes into learning, to look for and create opportunities that would both expand my technical skills and knowledge as a craftsman and deepen me as a person and, most of all, to “have faith.” 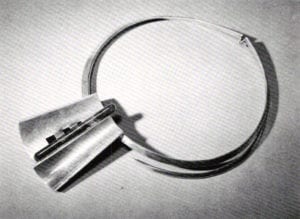 After I had worked with Andy for a year-and-a-half, she felt it was important for me to experience a jewelry business in full operation and encouraged me to apply for a work/study grant to Denmark for 1972-73. As part of my winning such a scholarship, she tried to teach me Danish. Although lunchtime was “sacred” – to be quiet and read or to work over a foreign crossword puzzle, Andy would correct my short written assignments and insist that we converse in simple Danish, practicing key workshop phrases like, “What gauge sterling should I use?” or “Where is the wooden mallet?” or “Please pass the file.”

Each Christmas Andy threw a party in the workshop. The front door was bolted and business postponed for the day. Fine linen and china were brought out, special food was prepared. Presents, songs, poems and lots of laughter were shared.

In the mid 1970s, Andy did finally retire and return to Denmark to be with her devoted family and friends. She returned to New York several times to visit. By now she was aging gracefully, yet with each trip she found it a bit more difficult to navigate. When it became too much, she graciously welcomed visitors into her home in Copenhagen. Andy continued to be engaged in her metalwork as long as her health allowed. She was an accomplished artist, an inspiring teacher and a dear friend.

All articles by this author
Previous Metalsmith ’90 Summer: Exhibition Reviews
Next Art and Technics: Supplies and Materials
Social media