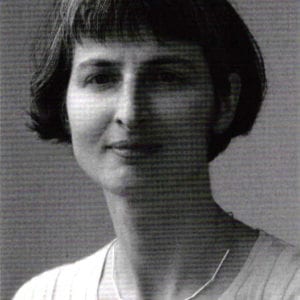 Dorothee Striffler has made her choice: the square is far and away her favorite form. And, there are good reasons for that because the square is the strongest and more succinct of all geometric forms. 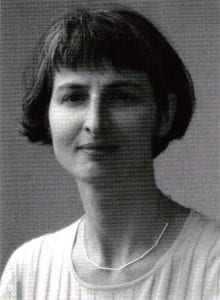 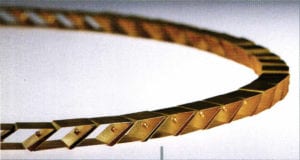 Does her love for the square possibly hinge upon a royal building code from the 18th century? It envisions a checkerboard-square ground plan for Mannheim’s city center with letters and numbers instead of street names as a way to find your way around Born in Mannheim, Dorothee Striffler is living and working there again since she finished her training in Pforzheim, Heidelberg and Venice. Together with Stefan Krauss, she opened a studio in 2002. “Praise God and thank the Lord I’m back in my beloved Mannheim!” as Wolfgang Amadeus Mozart put it in 1778 and his father Leopold added “The city of Mannheim is uncommonly beautiful because of its regularity”

Dorothee Striffler’s jewelry is also uncommonly beautiful and expressive because the pivotal theme she works on is articulating the simple and basic. At 38, the goldsmith and designer defines the basic as “restricting yourself to the most necessary details and excluding superfluous decoration” And she is especially endeared to one of the simplest basic forms to be found anywhere, the square, defined as a basic rectangle with four right angles and four equally long sides. For Dorothee Striffler, the real attraction is the fact that a form that is as simple as the square still is incredibly diverse in its design potential. You just have to amend a few sometimes even the tiniest details. And when you take a look at her chains, it becomes more than obvious that she hasn’t been analyzing the wide range of variations for the square just recently. Each new idea is built upon the experience gathered with the previous models and the insight gained with today’s work are put to good use in coming up with tomorrow’s shapes. 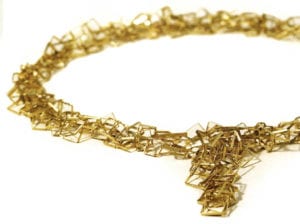 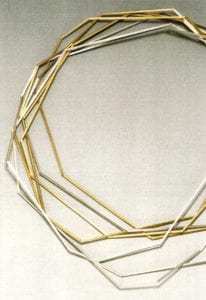 Playing with light and lightheartedness

Others might see it as bulky or awkward. But for Dorothee Striffler as a jewelry designer, it has just the right quantum of challenge. The square’s distinctly limited areas tempt you to draft amazingly exciting ideas. Dorothee Striffler theorizes that “in contrast to circles or balls, squares and cubes, as their 3-dimensional counterparts, are so interesting just because their edges are so unmistakably defined. When they are lined up along one another; their surfaces are juxtaposed on one another to create a vivid light-and-shadow effect”. The specific elements that a chain consists of always describe or circumscribe a space. In other words, these little square surfaces linked up loosely to one another generate fascinating interiors, intervals and plays with light by the way they are arranged in relation to one another, for instance as side walls to an airy cube. She thinks “varying the position of the surfaces to light creates the most delightful reflections”. And, in spite of its optical volume, working like this also has another effect: these chains are amazingly lightweight. Hardly any of them weighs more than 30 grams although they are sometimes as long as one meter. 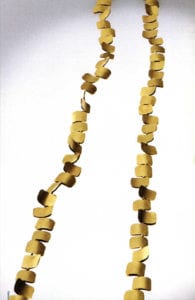 In spite of the severe form of the square, Dorothee Striffler’s work never seems cool or inordinately unemotional. That’s due to the painstaking work the trained goldsmith puts into her material. She works almost exclusively with gold and it justifies all the work she puts into it because, in contrast to silver, it keeps its shape even at minimum material thickness. Each individual element of the chain is rolled by hand and trimmed by eye, which is one of the reasons for its likeable lack of precision in the stringent shape. The surfaces of each of the squares are always brushed mat or structured because, as Dorothee Striffler says, “the human eye can perceive the unpolished surfaces of the 3-dimensional nature of the specific elements and the total chains particularly well”.