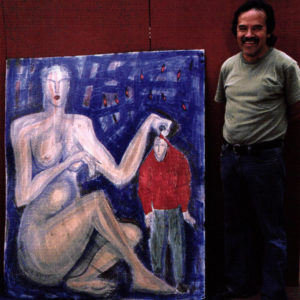 Last April 2008, at Galeria Medellin 174,in Mexico City, under the name of “Esmaltes Sobre Metales,” two artists exhibited their enamels: Alejandro Flores Horta, *EN RE 2,” and Maitza Morillas, “Incandescencias.” All the pieces from these two artists were made using liquid enamels over steel.

He studied enamel in 1976 with Ana Teresa Fierro (1926-2005), a very important Mexican enamellist, who, after studying in Paris in f959-f 960, returned to Mexico City where she founded the first enamel class, at the Academia de San Carlos, in 1964; this art school was established in 1780 and still operates teaching enamel as part of their program. He left the school in L978, returning in 1985, when he was invited to exhibit his enamels as a “guest artist.” In 1989, he became assistant Professor, together with Mrs. Fierro, and since 2004 he has been teaching independently at this same school, using the free-style that he learned from her, with liquid industrial enamels as a new form of expression.

When Flores Horta was a student, he was allowed to handle the liquid enamel as he wanted; he did not know what the/material was, so he kept experimenting with this new medium. He tried textures, sgraffito, only one firing, or up to 15 firings…and he says, “I got hooked, because of the magic of the material and the excitement of not knowing what will come out of the kiln!”

He works on steel pipes, found-objects, steel mesh, even car exhaust tubes. Mary of the pieces are soldered (which is usually done before firing), others are assembled with the use of rivets or screws, or tied with steel wires. After cleaning the piece, he applies a special ground. After firing this coat for four minutes, he starts building his design from the first layer; usually with sgraffito. The pieces are fired about two or three minutes at 750-800 degrees Celsius (1380″-1470 degrees Fahrenheit), anywhere from five to twelve times, depending on the design and size of the piece. The temperature is lower for firing reds.

The enamel is bought in powder form from Ferro in Mexico, and mixed with water to the necessary consistency.

Mr. Flores Horta’s pieces at the exhibit were in many different sizes, from very small ones to some measuring six feet high (fired in an industrial kiln).

“I work with the objects of my time, interfering only enough to change them, but leaving their own character inside, their inner ‘essence,’ because it is an artist’s commitment to work and think in relationship to the moment in time that he is living in, and to do so, you only have to contribute something from your own spirit,” Alejandro Flores Horta.

He has had 16 solo exhibits and 33 group shows in Mexican galleries. Last year, he was chosen by the Swedish Company Cellmark as a guest artist, to illustrate their Web Site (www.cellmark.com) with his enamels, as well as their 2008 Annual Report, which is distributed in 130 countries.

Maritza Morillas was born in Mexico City in 1969. She studied Visual Arts at the Escuela Nacional de Artes Plasticas, a school belonging to the National University. Her training was as a painter, specializing in oil and acrylics. While she was attending school, she had the opportunity to participate in an enamel class taught by Ana Teresa Fierro, and afterwards Maritza started experimenting with this newly learned technique, but applying her training as a painter. Since 1999, she has been devoted to working with liquid enamels over steel. She has also been attending Alejandro Flores Horta’s enameling classes since 2000.

She works over recycled metal enameled pieces: cups, dishes, spoons, even clyster-pipes and chamber pots, which she finds in Mexican flea markets. Her interest makes her look for all of these old objects that nobody uses anymore, even while traveling; she has bought many of them in Turkey and in Spain. Maritza explains, “I love to interact with these findings, making them lose their old utilitarian function and giving them a new artistic expression.”

Before starting the enameling process, she has to restore the pieces completely because most of them are in very bad condition when found. The first layer is a ground that will serve as base for many subsequent firings (the pieces are fired between five and seven times). She uses liquid industrial enamel with the same technique as painting.

One of Ms. Morillas’ favorite subjects in her paintings was death, and in her enamels it is insects. Some years ago she was invited by a feminist group to participate in the International Day Against Violence Against Women that is observed on November 25. For the exhibit, which to place in 2000, she started painting a series called “CAroDAtaVERnivus,” related to “las muertas du Juarez” (female deaths in Ciudad Juarez, a border city with the United States, where many women had been murdered). The exhibit generated much debate due to its sensitive subject. The beautiful insects were shown eating corpses, with flies and worms thriving … her two favorite subjects merged together in her paintings and enamels, developing an obsession with morbid subjects. She wanted to learn more about necrophagous insects, and thus started studying “forensic entomology” (which, for example, helps determine the time of death of a corpse based on the insects that infest them.

“I decided to look for beauty where everybody things there is none…,” Maritza Morillas.

After that exhibition, her succeeding paintings lost their color, turning black and white. In many of her following exhibitions she has been devoted to the subjects exclusively related to women’s issues.

In the exhibition “Incandescencias,” Maritza presented 29 very colorful enameled art-objects, including an “installation” called “Ojos Tapados” (blindfolded eyes), consisting of 30 pot lids, enameled on both sides, hanging from the two-story high ceiling. About it, she says, “sometimes we do not want to see what we are seeing.” She designs her pieces as a whole: the enamel is set in a surrounding that “frames” the idea, such as wooden boxes, hand-painted in acrylic; a metal cage; etc. The enamel pieces are never alone.

Ms. Morillas has presented her work in many group shows, as well as solo exhibits. Her enamels and paintings have been exhibited in Mexico City and many other cities in the Mexican Republic, Spain, The United States and Chile.

Glass on Metal is the only publication dedicated to enameling and related arts. Technical information, book reviews, how-to articles and insight on contemporary enamelers highlight each issue.